Tanzania’s oldest and most popular national park, also a world heritage site and recently proclaimed a 7th worldwide wonder, the Serengeti is famed for its annual migration, when some six million hooves pound the open plains, as more than 200,000 zebra and 300,000 Thomson’s gazelle join the wildebeest’s trek for fresh grazing. A massive wilderness of 14500 square km, where every day brings a new landscape and a new adventure. 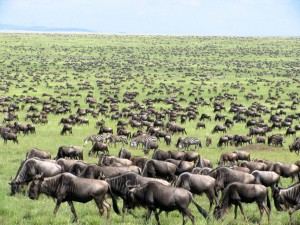 Yet even when the migration is quiet, the Serengeti offers arguably the most scintillating game-viewing in Africa: Great herds of buffalo, smaller groups of elephant and giraffe, and thousands upon thousands of eland, topi, kongoni, impala and Grant’s gazelle.

But there is more to Serengeti than large mammals. Gaudy agama lizards and rock hyraxes scuffle around the surfaces of the park’s isolated granite koppies. A full 100 varieties of dung beetle have been recorded, as have 500-plus bird species, ranging from the outsized ostrich and bizarre secretary bird of the open grassland, to the black eagles that soar effortlessly above the Lobo Hills.

What to do
-Game drives safari, Hot air balloon safaris, walking safari, picnicking, bush lunch/dinner we canarranged for you.

When to go
To follow the wildebeest migration, December-July. To see predators, June-October.

Recommended Tour Itinerary for you 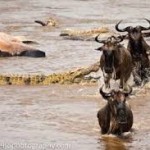 Large section of the Serengeti National Park. The sight of one hundred thousand wildebeest and zebras crossing the grassland savanna is something to behold and is surely one of Africa’s natural wonders. However no matter what time of year you decide to visit the wildlife watching is superb. 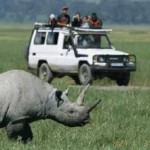 An nine (9) day Tanzania safari package, that takes you to most of the key destinations in the Northern safari circuit. Places you would visit:  Tarangire, Ngorongoro, Serengeti, Lake Manyara& Lake Natron. Areas of interest: Crater tour, The great wildebeest migration event, Balloon ride option, Olduvai gorge, The tree climbing lions in Lake Manyara, elephants in Tarangire and people’s culture on your safari tour.