Your welcome to explore Tanzania’s people and their cultures below here is our Cultural packages normally combine Game drive and walking safari. Some highlights and place of interest are Tarangire National Park, the Empakai and Olmoti Craters which is the sole active volcano of Tanzania.OldonyoLengai and the Lake Natron at its huge populations of flamingos and a beautiful waterfall that it can offer.

You will explore the wilderness on game drives by car and great chance to proceed exploring the nature by foot.  You will have plenty of opportunities to meet different ethnical groups and guaranteed satisfactory tour you will be fascinated by their knowledge of the nature, culture and traditional mode of their living. All overnights on Safari in tents.

Trip Info: You will enjoy and experience nature, wildlife, habit and habitat of the fauna and flora in the natural areas, also peoples and culture 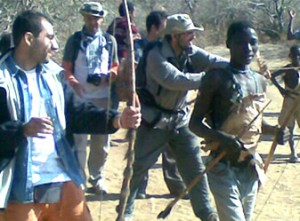 The Hadza people, or Hadzabe’e, are an ethnic group in central Tanzania, living around Lake Eyasi in the central Rift Valley and in the neighboring Serengeti Plateau. The Hadza number just under 1000Some300-400 Hadza live as hunter-gatherers, much as they have for thousands or even tens of thousands of years, they are the last functioning hunter-gatherers in Africa. The Hadza are not closely related to any other people highly skilled, selective, and opportunistic foragers, and adjust their diet according to season and circumstance.

The Hadza men usually forage individually, and during the course of day usually feed themselves while foraging, and also bring home some honey, fruit, or wild game when available. Women forage in larger parties, and usually bring home berries, baobab fruit, and tubers, depending on availability. Traditionally the Hadza do not make use of hunting dogs, although this custom has been recently borrowed from neighboring tribes to some degree. Most men (80%+) do not use dogs when foraging. 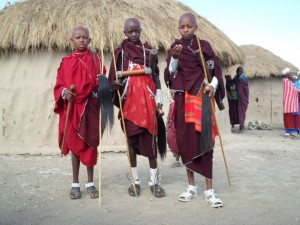 TheMaasai are an indigenous African ethnic group of semi-nomadic people located in northern Tanzania and Kenya. Due to their distinctive customs and dress and residence near the many game parks of East Africa, they are among the most well-known African ethnic groups internationally. Language They speak Maasai, a member of the Nilo-Saharan language family that is related to Dinka and Nuer, and are also educated in the official languages of Tanzania and Kenya: Swahili and English.

The Maasai population has been variously estimated as 377,089 from the 1989 Census or as 453,000 language speakers in Kenya in 1994 and 430,000 in Tanzania in 1993 with a total estimated as “approaching 900,000″ Estimates of the respective Maasai populations in both countries arecomplicated by the remote locations of many villages, and their semi-nomadic nature.

The Masai shelter Inkajijik (houses) are either loaf-shaped or circular, and are constructed by women. The structural framework is formed of timber poles fixed directly into the ground and interwoven with a lattice of smaller branches, which is then plastered with a mix of mud, sticks, grass, cow dung and urine, and ash. The enkaji is small, measuring about 3m x 5m and standing only 1.5m high. Within this space the family cooks, eats, sleeps, socializes and stores food, fuel and other household possessions. Small livestock are also often accommodated within the enkaji.

Villages are enclosed in a circular fence (Enkang) built by the men, usually of thorned acacia. At night all cows, goats and sheep are placed in an enclosure in the center, safe from wild animals.Maasai’s societyLeadership is strongly patriarchal in nature with elder men, sometimes joined by retired elders, deciding most major matters for each Maasai group.

A full body of oral law covers many aspects of behavior. Formal execution is unknown, and normally payment in cattle will settle matters.  An out of court process called ‘amitu’, ‘to make peace’, or ‘arop’, which involves a substantial apology, is also practiced.A high infant mortality rate among the Maasai has led to babies not truly being recognized until they reach an age of 3 moons.

For Maasai living a traditional life, the end of life is virtually without ceremony, and the dead are left out for scavengers. Burial has in the past been reserved for great chiefs, since it is believed to be harmful to the soil.